Based on the "Misc" category.
Alternatively, view REPLesent alternatives based on common mentions on social networks and blogs.

Clean code begins in your IDE with SonarLint

Up your coding game and discover issues early. SonarLint is a free plugin that helps you find & fix bugs and security issues from the moment you start writing code. Install from your favorite IDE marketplace today.
Promo www.sonarlint.org

* Code Quality Rankings and insights are calculated and provided by Lumnify.
They vary from L1 to L5 with "L5" being the highest.

Do you think we are missing an alternative of REPLesent or a related project?

REPLesent is a powerful tool to build presentations using the Scala REPL.

Conceptualized and originally implemented while waiting almost two hours for my plane to be de-iced, it was introduced during the Northeast Scala Symposium 2015 in Boston.

While clearly not a Keynote replacement, REPLesent is a good option for training sessions and technical talks featuring live coding. Its old-school looks were considered very cool by many conference attendants. 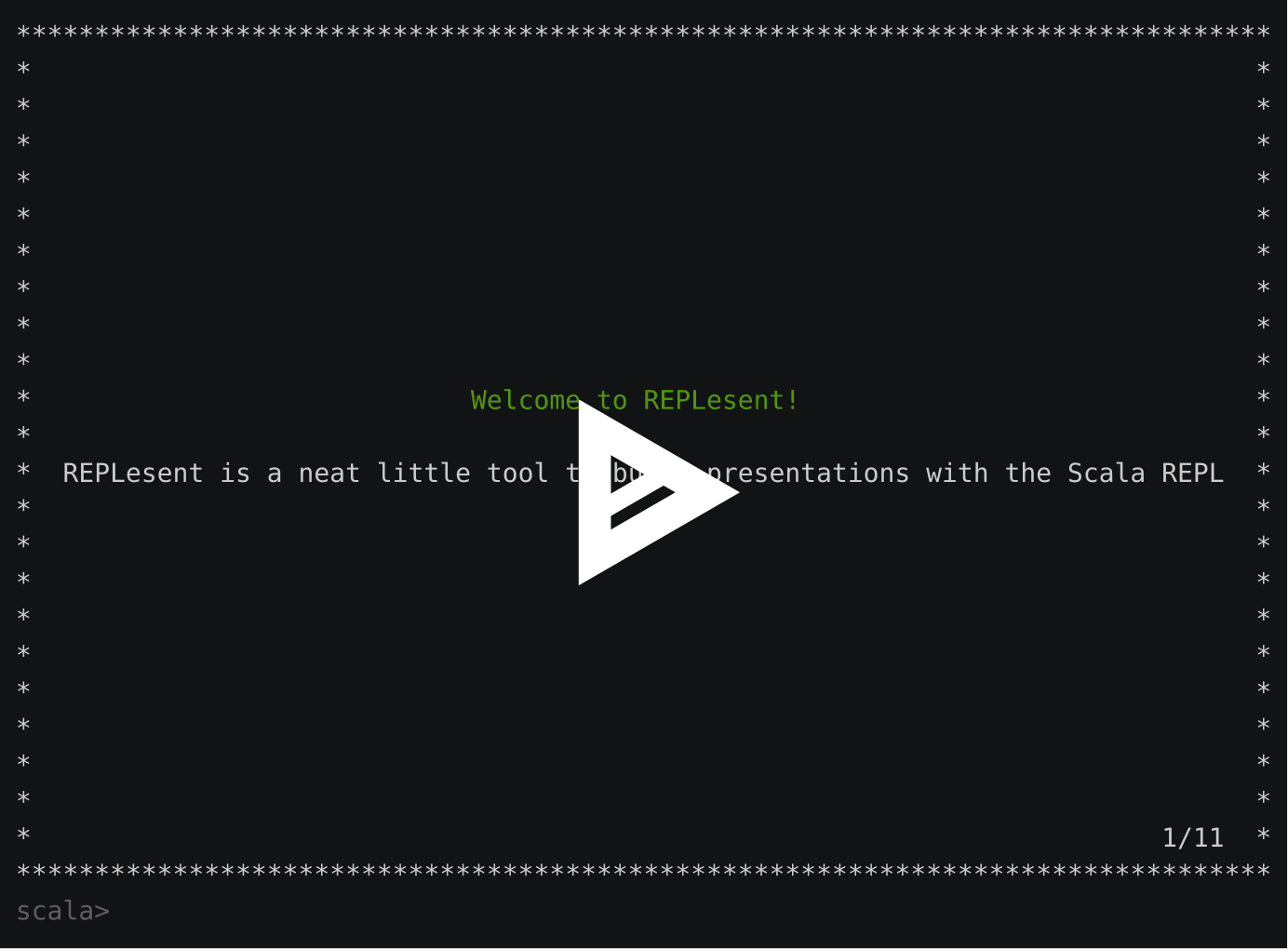 REPLesent is distributed as a single .scala file and has no dependencies.

REPLesent was designed to be used only in conjunction with the Scala REPL. It is not meant to be compiled as a standalone application (build.sbt is only for running the unit tests).

We recommend you install and use the full Scala distribution (the scala command) instead of just the sbt console. Scala 2.11.4 or later and JDK 7 or later are the preferred versions. If you are using Windows, you need to run scala in ANSICON or another console that supports ANSI escape codes. REPLesent will not render correctly in Windows' standard cmd console.

To get started, download and save to the same folder the files REPLesent.scala and REPLesent.txt. The file emoji.txt is optional, only needed to enable emoji support.

Open the REPL and enter the two statements below:

Do not forget to replace 80, 25 with the actual size of your terminal window. The intp=$intp incantation is required to hook onto the REPL to run slide code.

Once all is done, type f, press ENTER, and follow the on-screen instructions.

Experimental screen size auto-detection: For Unix-like systems, including Mac OS X and Linux, you can omit the screen size. Does not work for Microsoft Windows systems.

A space separating the alignment command from the text is mandatory.

An optional pattern may be specified immediately following the forward slash. Unicode characters and ANSI color escapes (as above) are supported.

To enable emoji support, you will need a copy of the emoji.txt file.

Almost all shortcuts listed by the Emoji cheat sheet are supported. You can look at emoji.txt for the definitive list of supported emoji.

Emojis can be combined with horizontal rulers and, depending on your system fonts, ANSI colors, too.

Emoji has only be tested on Mac OS X Terminal.app and Gnome Terminal, YMMV.

As your REPLesent.txt grows, you may find yourself needing to split slides into logical chunks for quick navigation.

In order to use this mode, simply place all your individual slide files into a directory (in this example, we'll be using the directory name "slides"), all ending with the file extension .replesent.

Then, initialize REPLesent with the additional parameter source="slides", which will concatinate all files in ASCIIbetical order. Suggested practice is to name files with a leading sequence number, padding with zeros (01, 02, 03 ... 14, 15 ...)

One caveat is that since this is strict file concatination, slide separators will not be added automatically, so please remember to end your files with --- or --.

Included in this repository is a vim directory, which contains a vim plugin for editing REPLesent slides.

This plugin depends on derekwyatt/vim-scala for Scala syntax highlighting.

Simply copy the files into your ~/.vim directory to get started, or use Vundle (or similar) like:

Licensed under the Apache License, Version 2.0 (the "License"); you may not use this file except in compliance with the License. You may obtain a copy of the License at


*Note that all licence references and agreements mentioned in the REPLesent README section above are relevant to that project's source code only.

Do not miss the trending, packages, news and articles with our weekly report.